Holiday Read: A Sailor Of Austria 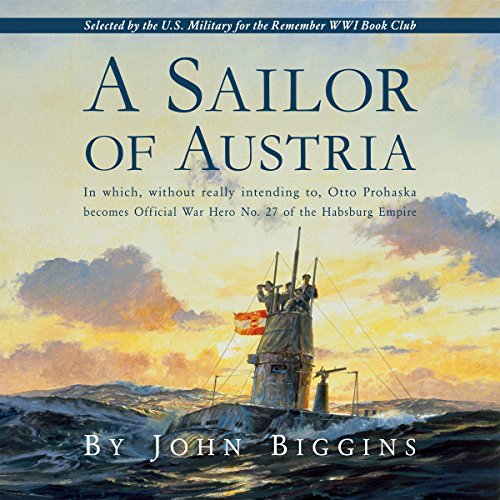 A Sailor of Austria is naval military fiction, with the unusual subject of the Habsburg navy during the First World War. If that was not a niche enough topic, it largely involves the submarine service of the Austrian navy, very much a junior player in World War One. Starting in 1915, this novel makes plain that the Austrians were running a tiny fleet of second rate submarines, attempting to keep the British and French navies from operating with impunity in the Adriatic Sea.

The main character in A Sailor of Austria is Otto Prohaska, a Czech officer in the Austrian fleet who is assigned to command a U-boat operating out of Pula and the Gulf of Kotor, in 1915. When he steps aboard, he has had less then 90 minutes of experience on submarines.

That said, the Austrian submarine fleet produced some propaganda coups for the empire early on in the war, especially when the army was taking some early defeats in Serbia and against the Russians in Galicia. Georg von Trapp, patron of the Trapp Family Singers, themselves the inspiration for the 1965 film The Sound of Music (played by Christopher Plummer), was, you guessed it, an Austrian submarine commander before he got into the family singing game. He was commander of the U-5 and U-14 and sank 14 Allied vessels. This included the French armoured cruiser Leon Gambetta and the Italian submarine Nereide.

The Germans managed to transport some of their U-boats to the Mediterranean by moving them in parts overland by rail, putting them together in Pula, and then using them in the Eastern Mediterranean. One of the key targets were the Allied ships moving between Suez and Gibraltar, carrying troops and supplies for the Western Front.

The Austrians and the Germans, although allies, had some cultural abrasion going on, particularly when you consider that the Austrian navy was staffed with a polyglot group of nationalities, including Hungarians, Croats, Czechs and Poles.

When Italy entered the war against Austria in 1915 (with its eyes on Trieste), it declined to declare war on Germany initially, meaning that the German subs in the Adriatic were forced to re-flag as Austrian ones and carry an Austrian officer on board. This was done to avoid the possibility of a German crew torpedoing an Italian ship by mistake and potentially being prosecuted and hanged for piracy.

In the book, this still happens, of course, with a German U-boat carrying Prohaska as its token Austrian, sinking an Italian ammo ship before itself sinking off Corfu. The German crew is forced to evade Italian troops on the island, with Prohaska valiantly playing a rear guard role.

The novel covers Prohaska's career throughout the war, ending with the tragic demise of the empire as it folded in on itself ahead of the armistice in 1918. It is remarkable how fast the many nationalities turned on their Austrian masters once they could see Austria was on its knees. The empire seems to have largely been driven to total economic collapse rather than outright military defeat, its fall hastened by the onset of Spanish flu.

Prohaska is no apologist for the Habsburgs and the book is written in a colourful, slightly tongue in cheek style, with more than a touch of humour. For example, the submarine's visit to North Africa carrying an envoy and silver for a Sanussi revolt against the British and Italians, is entertainingly told, including the crew's efforts to get a white baby camel, a present from the leader of the Sanussi tribes to Emperor Franz-Josef, back to Austria in one piece.

This theatre of operations is not really written about much in English, even though the Royal Navy was an active participant. The British seem to have been largely concerned with protecting their convoys and in keeping the Austrians bottled up safely in the Adriatic. Towards the end of the war, the RN was involved in supporting amphibious landings up the Adriatic coast, with British and even US troops taking key cities like Split and Zadar. These were subsequently handed over to the new kingdom of Yugoslavia as part of the Versailles treaty settlement.

It is also important to remember that WW1 submarines were nowhere near as advanced as their WW2 successors. They had very limited speed, and needed to spend a lot of time on the surface, using their diesel engines to re-charge the electric motors they used when submerged. They seem to have experienced constant technical problems, at least in the Austrian fleet, and being on the surface made them vulnerable to air attack, especially once Allied planes started operating out of Italy.