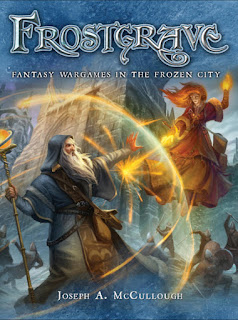 I'm in the process of concocting a number of warbands for Frostgrave, with a view to potentially launching a campaign at some stage. The great thing about Frostgrave is that you don't need many miniatures, and the game is not wedded to a particular range. Hence, it is quite easy to slot in figures you already own in your collection. I'm sure this has played a large role in its commercial success.

I'm going to start by generating a number of warbands using figures I own. In each case, I'll be taking you through the decision making process as each warband is assembled. Much of this will be dictated by the availability of my own figures, and because I've never played the game, it may be obvious to veterans that I'm making some schoolboy errors. We'll have to see as we go along whether drastic mistakes have been made.

Frostgrave requires that first you choose your wizard. Your wizard is a bit like a quarterback in [American] football: it is hard to win with a poor one! Hence, it bears spending some time on mulling this one over.

Ragner wears a kilt, and little else apart from his prized tatoos. Anyone who asks him whether he might be a little chilly will be treated to a diatribe about "wee southern jessies".

Starting with his own spells then, Ragner picks Awareness, Reveal Invisible (largely because I HATE people sneaking around with some form of cloaking, be it Harry Potter or the Predator), and Combat Awareness.

Ragner's aligned schools are Thaumaturge, Chronomancer and Illusionist. I'm aware that these are going to be harder for him to cast, so best pick ones which are quite easy: Heal for Thaumaturge, Fast Act for Chronomancer (this looks rather good on paper, but we'll have to see how it works in practice), and Fool's Gold for Illusionism (because it looks rather fun).

Now Ragner comes to his neutral schools, which are Enchanter, Summoner, Necromancer, Elementalist and Sigilist. Again, he has a +4 penalty on these spells, so may be worth going for the easier ones...Wall (Elementalist), Animate Construct (Enchanter - I like this one, he needs to roll pre-game to see if he can bring it with him and it counts as a warband slot regardless), Raise Zombie (Necromancy - nice and easy, and it gives him a zombie without filling a warband slot), Furious Quill (Sigilism - amusing) and Imp (Summonor - not too testing).

Ragner has a staff and decides to buy a dagger (5gp) from his budget of 500.

Next we move to the apprentice. The rules say that "while it is not strictly necessary for a wizard to have an apprentice, it would be both unusual and probably unwise to go without." An apprentice costs 200gps to hire, which is a BIG slice of the total budget, but heck, I'll go with the game designer's advice. Ragner is joined by his nephew, Nordgrint, who is interested in becoming a soothsayer himself. Nordgrint also carries a staff. He has flowing blond hair and seems to have left his trousers at home, but eschews his uncle's kilt.

Nordgrint knows all Ragner's spells, but casts them with a -2 penalty, being an apprentice. It seems an apprentice is just like a back up quarterback in [American] football.

So who it is that is mad enough to follow Ragner and Nordgrint to Frostgrave, eh? Ragner now has 295gp left, which is not much.

Ragner recruits Skeggi Boozehound, a dwarf adventurer who will count as a man-at-arms, as he has a hand axe and a shield. Skeggi does not suffer penalties for being a dwarf - in the basic rules, there do not seem to be additional rules for adventurers from other races, so Skeggi collects his 80gp signing fee.

I quite fancy giving Ragner a couple of trackers as well - this will cost him 80gp each, but I think they're worth it, as they also have bows. He hires Gosted and Lumbard, two trackers from the north country. He now has 55gp left to spend.

Ragner now has a decision to make - he could either spend some money on an archer or a crossbowman, or add a few hounds to his retinue. He decides to go with the hounds. Bear in mind he has now filled four slots, plus his construct, which makes it five. A warband can have a maximum of 10 members, counting the wizard. He pays 40gp and gets himself four hounds.

Ragner keeps 15gp in the bank for a rainy day.

Next time: We look at the warband of the Elementalist, Gost Woodlight...

Skeggi is nopw
Posted by Stuart at 18:58