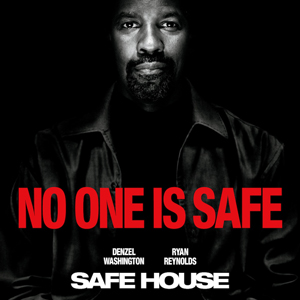 It can be difficult to make a good espionage movie set in the post-Cold War era, but now and again little gems are brought to light. Recovering as I am from yet another winter cold, I caught Safe House on Netflix. This stars Ryan Reynolds as a very junior CIA agent, in this case stuck in a dead end assignment in Cape Town, where he is the custodian of an unofficial CIA safe house. His job is basically to idle the day away, awaiting a call from his superiors, while trying to persuade his boss, played by Brendan Gleeson, to post him to Paris.

Why Paris, you ask? Because he is dating a hot French doctor who is about to return there, and Paris has to be a better career move in the spy stakes than South Africa.

Enter Denzel Washington at stage left. Denzel plays Tobin Frost, a legendary CIA agent from the 1980s and 1990s who eventually got sick of the agency and dropped off the grid to become a sort of freelance spy. He is walking around with some very incriminating data which he wants to auction to the highest bidder. He is in cahoots with a corrupt MI6 agent played by Liam "King Theoden" Cunningham, who obtained the files in the first place.

I don't really want to go much deeper into the plot without spoiling it, but it is a classic spy drama, with wheels turning within wheels, and a mounting sense of desperate paranoia. Reynolds is great as the wet behind the ears Ivy League type who gets dropped in the deep end of a fast evolving situation, and reminds me a little of Robert Redford in Three Days of the Condor. Washington can be a bit wooden at times, but it is nice to see him playing the embittered veteran, and boy is he bitter this time! Other people worth mentioning are Sam Shepard as the deputy director of the CIA, Robert "Terminator 2" Patrick leading a team of undercover special ops troops, Vera Farmiga as an ambitious thirtysomething CIA operator and Fares Fares as a chillingly ruthless assassin.

South Africa is a very different choice for a setting. It occasionally intrudes into the plot - e.g. a forger is located in a shanty town, and there is a great scene that takes place during a football match.

You might come away from Safe House feeling that it is a bit formulaic, but it ticks so many of the boxes for this genre that I have to commend it for its technical execution, and I always admire that, even if some originality is lacking. The light in South Africa, which was also evident in the TV series Black Sails, is just phenomenal, and seems to make the camera's job easy, particularly in the scenes outside Cape Town.

Safe House is a grittier movie than the Bourne series. People are able to screw up and do so, frequently. Silly things go wrong for the good guys and the bad guys, and I like that. Worth seeing if you can catch it on Netflix this month. 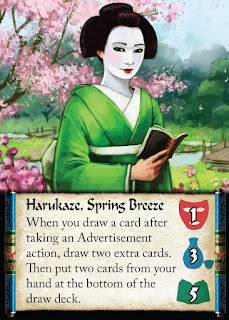 Mai-Star, from AEG Games, is a wonderful little card game for 3-6 players, created by Seiji Kanai. All the art for the game looks to come from AEG's extensive back catalogue of Legend of the Five Rings card art, but you have to wonder how much longer AEG will be able to use this, now that the rights have gone to FFG. Still, the quality of the cards and the art is first rate, and while the game does not reference Rokugan specifically, you can pretend you are playing out the intrigues of the geishas of the Emerald Empire.

Mai-Star is about geisha. Each player has one geisha character, and they are all rated for three talents, namely Performance, Service and Intelligence. But this is really just your reputation, not your actual ability. You can only attract customers by improving your reputation.

The game is played in three rounds. Geisha score according to the wealth of the customers they entertain. Each round, a player chooses one character from his hand to either be a customer, or to advertise for the geisha. Advertisers help to promote the geisha in one of the three core abilities. To entertain characters as clients, however, the geisha must meet their minimum demands in one of the core abilities, hence the importance of having reliable folk out and about promoting you.

There are quite a wide variety of characters. Some, like the scholars and ronin, pay less money but don't have massive expectations, and are good clients to use early on. Actors have money, but also make the best ambassadors for the geisha. Okasan are also excellent at spreading the word.

Many characters have particular special abilities which they can help a geisha with if they become your guests. These do not kick in if the geisha simply have them as advertisers. For example, the doctor is wealthy, but also lets you take a second turn. The thief lets you get rid of another player's guest. The sumo lets you see another player's hand and discard one of his cards. The ronin is good for protection but lacks cash. There don't seem to be many samurai, but they are quite affluent, even more well-heeled than doctors!

There are some strategically critical characters, however. The first of these are the daimyo. They are difficult to lure in, but if they turn up as your guest, then they can attract all the advertisers you have out there of the same colour card. This means they all turn up to party with the daimyo and spend more money. It basically reflects clan politics, where the presence of the feudal lord attracts his followers. 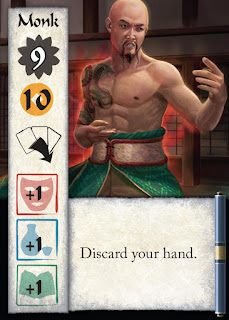 The other two characters of import are the monk and the shogun. The shogun allows the player to add his remaining cards in his hand as guests and end the round, while the monk (right) will just end the round, which is good if you're ahead. There is only one shogun and one monk. Scoring is based on the total wealth of guests entertained in the round, minus the wealth of cards still in hand. Mai-Star lasts three rounds. The winner is the geisha with the most money at the end.

I have to say I really like Mai-Star. It is quick to play, and keeps you thinking all the way through. Even with more players, I don't think it would last appreciably longer, as the shogun and monk cards will still succeed in ending the round speedily. Although I was beaten in both games I played, it was enormous fun, and I hammered the table in furstration on several occasions, so caught up was I in the intrigues of the geisha. My only criticism, and it is a small one, is that players with experience of the game have a distinct advantage over newcomers. Hence, I would advise playing a practice round, even if you have only one newbie at the table.
Posted by Stuart at 22:58 No comments:

The French are coming! 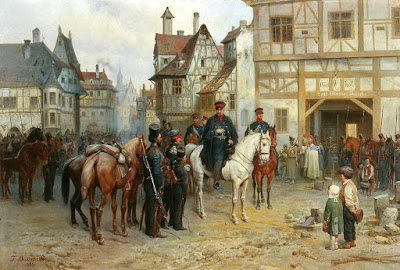 I've not had any communications from the British, although I think Wellington may still be in Brussels. A small  unit of Hanoverians rode in out of the dawn mist at Binche for a chat with Zeithen. Indications are that there may be Anglo-Dutch forces at Quatre Bras, but again, I have no idea at all how many soldiers are there. The French, however, are most certainly on the move. As expected, they have tried to assault across the river at Dinant, a sneaky move. My division there is under attack as of this morning.

Also, a second attack has come in against the division at Laneffe. Again, the purpose of its presence there was to try to detect where the French were coming from and reinforce accordingly. I've no idea what sort of strength is involved in either area at this stage. It could be a probing attack, it could be a full-blooded assault.

Finally, a third French force is trying to get across at Thuin. The big question is, which one is Napoleon's main thrust?

We also have reports of ANOTHER French force in Mons. I'm hoping my allies may be able to tackle that one, but it does sit on the right flank of the army, which could be problematic. If Napoleon is aiming for Brussels, I think this is the most likely route of his main attack.

Pirch's corps in Charleroi does not look like it will get the opportunity to fight a single opponent, but we need to get a feel for how many troops Napoleon is throwing across the river there. I am not entertaining any hopes of stopping the French there, but we need to reinforce that position today, and find out what is going on. Hence, Pirch is going to have to spread himself a bit wider, and reinforce his front where he can.

In the east, Thielemann is on his own at the moment with III Corps. I'm hoping this won't be a major French thrust against Namur, but if it is, we can handle it. Thielemann just needs to keep his wits about him, and be prepared to fall back if it turns out the main French thrust is there. We'll probably find out by early afternoon if he is in trouble.

In the west, I'm expecting more trouble, although here we have the benefit of the support of the allies on my right flank. The question is whether the English have their wits about them today? Zeithen should be able to handle whatever Napoleon has in Mons, at least until we can get a clearer picture.

I'm keeping some reserves up at Ligny and Gembloux. Why? Just because I'm paranoid. I don't believe in piling in with everything until I have the full picture, which right now I don't. Plus, it would be nice if the entire Prussian army wasn't wrecked in an afternoon. I'm hoping these divisions will be well placed to respond to a crisis, and reinforce where needed. In addition, I want to avoid marching my divisions all over the Belgian countryside, and getting them exhausted.

I'm moving my headquarters to Charleroi, as I want to be closer to where the action is, and to hear the sound of the guns. Plus I hear they do a mean carbonada flamande there, at the sign of Le Coq D'Or.