Mustering a party for Deadlands Noir

Our Warhammer FRP campaign is drifting towards its conclusion, and we expect its climatic and no doubt bloody conclusion imminently. Those who want the latest update on that can check it out here. We are not far from the final show-down, it just seems as if the major villain has chosen to flee to an alternate dimension, as they invariably do.

Last week, a player short, we decided to begin generating characters for 13th Age and Deadlands Noir. I'll go into more detail on my impressions of 13th Age in another post, but suffice to say that they are favourable.

For Deadlands I'd like to run the Red Harvest mini-campaign in 1935 New Orleans. Hence, we needed a party of characters that could work together as part of a private detective agency. I've left the players to come up with a name for this, but suffice to say they are all employees of said agency. Here's a quick run down on who we have so far.

Nukarah Vestal - Nukara was born in Argentina but grew up in New York. She moved to New Orelans in search of work.

Ross Lebouf (aka The Doctor) - the group's healer?

So, there we have it so far. The party has been generated around the table in a single evening with the omission of one PC. We also had time to complete a couple of 13th Age characters, but more on my Dragonspawn Rogue another time. The players pointed out at the time that the Deadlands party lacks a 'bruiser', i.e. a specialist in hand to hand combat. But bear in mind this is a Novice group of characters with relatively limited resources, especially as Depression-era New Orleans finds them fairly short of cash to begin with (only $75 each). More Deadlands later...
Posted by Stuart at 14:39 1 comment:

I spent a convivial evening chatting with my son yesterday about the sorts of games we'd especially like to see appearing on the Playstation in 2014. While we're not yet in the market for a PS4, some of the work already being done for it by software houses is impressive, to say the least. The two games below are due for release on the PS3 / PS4 in 2014, and both coincidentally deal with post-apocalyptic settings.


One of my big beefs has been the lack of a decent two player road warrior game on the platform. By this I mean a post-apocalyptic driver vs driver game with cars equipped with weapons and armour. I am thinking here of Car Wars as was (Steve Jackson Games), but adapted for the console market. Such a game should be able to support two player online teams, with one driving and the other manning weapons.

Avalanche Studios seems to be on the verge of releasing a game (projected April 2014) using the Mad Max IP, which looks intriguing, although we shall have to await the first reviews once it is finally released. This sounds as if it will be published for the PS3, which would be excellent. Whether it actually does a good job of road-based combat is another question. Early scenes do not reveal this. But it does seem to promise a much more open environment to adventure in, rather than linear plot development, which is all for the good.


Sadly I don't play Shadowrun any more, but some of the great team-based dynamics of that game seem to be in the offing from The Division. This looks like an entirely new level in multi-platform, collaborative gaming in an urban environment. Okay, so there isn't any Awakened world here, but check out the drones and remote gun platforms in this trailer, and the superb delivery of vital stats and map overlays. The ability for players to work together in the environment is also very reminiscent of Shadowrun, and if they can participate using different platforms, even better.


Apparently the game is inspired by Operation Dark Winter (a simulated bio-weapons attack on Oklahoma City in June 2001). The Division seems to be using New York instead. It will apparently only be playable online.
Posted by Stuart at 15:26 3 comments: 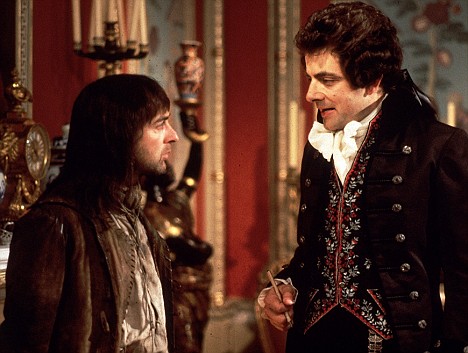 Some time ago, on this very blog, I postulated an idea for a RPG about 18th century rakes and raconteurs called Viscounts and Vagabonds. The game takes its inspiration from films like Dangerous Liaisons and Plunkett and Maclean, as well as the plays of Richard Sheridan (1751-1816) and the 1990s play by mail game En Garde. It can be played for high and tragic drama (e.g. The Duchess) or fast and furious laughter (Blackadder the Third). Part social comedy, part caper, typical adventures would involve PCs seeking to advance themselves socially and financially in Georgian London and further afield.

Although I've not started writing this yet, here are some of the key design elements I'd like to include in the game:

The game is still very much in the early development stage, and keeps getting put on the back burner. One important decision has to be whether to use an established rules system, or go with a stand alone engine. The former might be easier. But combat should take up less of the game than social interaction, ergo expect a game that is more about politics and social intrigue than duelling on Hampstead Heath or privateering against the Spanish.

More on this once it begins to take more shape. Feedback and ideas are always appreciated!