Review: Lamentations of the Flame Princess

A long, long time ago, in a galaxy far, far away, I used to play Basic D&D. I got into it at school, migrating there from the popular Fighting Fantasy game books, and it was a great starting point for me into the fantastic world of pen and paper RPGs. I played it a lot during school years, despite the efforts of some to convert me to AD&D - which I found nebulous, inaccessible and at times entirely illogical, with detailed rules for some relatively unnecessary things and nothing at all for other important issues - a bit like the European financial regulatory system, to be honest!

In recent months we've seen many independent game publishers turning to 'old school' systems, possibly as these have risen in popularity while disenchantment with D&D 4e has set in. They offer less complexity than, say, Pathfinder, while at the same time encouraging players to spend more time role playing and less time min/maxing their characters (something of a Pathfinder disease, I find).

Lamentations of the Flame Princess is one of these old school clones. I've really only had experience previously with Swords & Wizardry, and more recently received a copy of Crypts & Things, which is very similar in scope to Lamentations but with more of a hard core swords and sorcery feel to it. Our group has just started playing Lamentations, and you can read more about the GM's thoughts on it here. What follows are really my own, additional views as a player.

Going back to old school RPGing seems like a good idea on paper, but you do immediately miss some things. For starters, you forget how weak your PCs are. A first level magic user or cleric is really, really pants. There are no orisons in this game. You have one spell per 24 hours, and once it is cast, your 1st level magic user is little better than a dude in long robes waiting to get carved up. Secondly, unless you play an Elf, you're really little better than a glorified encumberance reservoir, until you get to higher levels. Clerics in Basic used to have the additional benefit of Turn Undead, but in Lamentations it is a SPELL - if you don't learn it, you don't get it! With Cure Light Wounds, a Basic D&D cleric could at least combine the attributes of an anti-undead weapon with healing magic. Not so in Lamentations. I can't quite figure this out. Why cripple a cleric even further when he is weak enough at low levels?

I also missed the separation of race and class - having got used to picking both race and class as character options in 3e D&D, it seems somehow restrictive to go back to having races like Elf as a de facto class in the game.

Lamentations does include quite an interesting skill system based off d6 - e.g. an average PC will have a 1/6 chance of succeeding in a Search task. It extrapolates the old searching for secret doors mechanic in Basic/Expert, allowing some characters to specialise in some areas. Halflings, for example, have a 5/6 change of hiding in the wilderness, which in our game made them ideal as scouts, sneaking around in the undergrowth. With two halflings in the party, both armed with missile weapons, they can become quite a devastating force.

Lamentations is, however, quite deadly at 1st level. As with some other D&D variants, I can see how once you are past level 6 or so, a party of characters can become more invulnerable, but at 1st level there is plenty of scope to die like flies, and access to healing magic is limited. Forget about the 'surges' in 4e!

Being old school, the XP system is again based off loot more than monster slaying or task achievement, even though scenario objectives might not be keyed to plunder. This creates somewhat of a conflict for PCs, because if you want to advance, you need to be plundering, although the scenarios being set by our GM have seemed to be move investigative in nature, and more suited to a game like Warhammer Fantasy Roleplay. Basic was more about plundering dungeons. You might earn a fee from a patron for completing other missions, but the bulk of your reward came from the loot, and the XP system was geared accordingly. In the old D&D module B3: Palace of the Silver Princess, your mission was to rescue the princess and save the kingdom, but you still got to keep all the loot you found in the palace! It should therefore come as no surprise if the PCs become more like vikings than noble paladins - that's what they get rewarded for!

In our two sessions to date, there has been a great deal more intelligence gathering, investigation and intrigue. But that has not translated into XP as the PCs have not been focused on looting. This may now change, and we could see the party becoming much more interested in the opportunity to loot. Given that they have largely been adventuring in human-dominated locales, however, it may come as no surprise when the adventurers indulge in a little theft too! After all, a bit of robbery can go a long way to helping you reach the next level!

Overall, Lamentations is a good addition to the increasing library of Basic D&D clones. Whether you need it if you already have Labyrinth Lord or Swords & Wizardry is an open question. I guess if I wanted to go back down this road as a GM I might even dust off my old Basic books and then graft on home brew rules, and Lamentations is simple enough to do this, if you wanted to (one of the great appeals, in my view, of these more stripped down rules). In summary, I think I've probably traveled too far as an RPGer to go back to playing this level of rules on a long term basis without some excessive tweaking/conversion. There is probably just a tad too little crunch for my tastes in Lamentations, although I have found myself wondering whether it could provide me with the foundations for my Viscounts & Vagabonds RPG project.
Posted by Stuart at 14:23 1 comment:

Due to a change in diary priorities, I'm no long going to be attending UK Games Expo or indeed running any games there. This is a pity, but then again it saves me a slog up to Birmingham, and the desperate scramble to finish off my one-shots, which no doubt would have coincided with a large client project.

Instead I'm working on a couple of gaming projects, the first of which is The Shamutanti Hills, part of the recent Crown of Kings campaign, which has been released for Advanced Fighting Fantasy. Veteran gamers who were rolling dice when Ronald Reagan was in the White House may recall The Shamutanti Hills as the first in a quadrilogy of adventure books written by Steve Jackson, of Games Workshop and Fighting Fantasy fame. Those adventures have been adapted for multi-player use in this new campaign book. 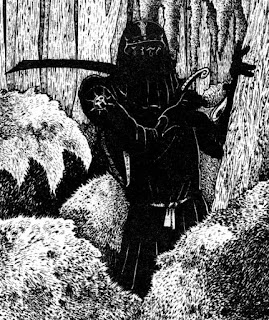 I loved the Fighting Fantasy game books, and loved the original Shamutanti Hills even more, as it allowed the adventurer character to use spells as well as swordplay. In addition, it had a slightly more exotic feel than Warlock of Firetop Mountain or Forest of Doom, partly thanks to the evocative John Blanche artwork, much of it faithfully reproduced in the new campaign book, much to my delight.

AFF is way too simplistic for my gaming group, hence the decision to convert it to Green Ronin's True 20 system. But why T20? I've only had limited experience of this set of rules, having once played in an abortive Call of Cthulhu campaign which used them, but what I saw of the system, I liked. Certainly characters are much easier to generate than for conventional d20. One needs to be careful with these rules, mind you. My other experience with them involved a dungeon bash in Eberron which was turned on its head by a player's canny use of the available powers to detect the bulk of the threats that lay ahead - in particular the ability to detect intelligent minds.

Powers in the vanilla version of T20 can be used by the Adept class (one of three available in the core rules). What makes them a bit different from D&D spells is that they can be used at will - no daily spell slots here - and most of them are readily accessible from first level. This gives the player choosing Adept some rather funky powers from the off, equivalents of spells which would only be accessible to much higher levels in D&D. The argument here is that this actually makes spell slinging more entertaining at lower levels. We'll see how it works in practice, but I'm reserving the option to make potentially game-breaking powers Fatiguing - i.e. the would-be sorceror runs the risk of running up his Fatigue levels if he uses or maintains too many Powers in sequence. 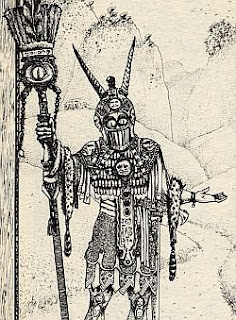 Converting Shamutanti Hills is also a useful learning experience for me, as it raises questions about the T20 system - for example I recently had to create a monster from scratch that did not exist in the T20 bestiary or indeed in the two 3e Monster Manuals I own (hence no scope for porting it over from d20). In addition, there are some powerful monsters being added to the mix which may, on paper, be too much of a threat to a 1st level party. I say that, but my feeling is that if there is at least one Adept in the group, this may not be the case. I feel it is better to throw some hefty challenges in there and see if the PCs are up for it than let them breeze through. I've not forgotten how we blitzed the Pathfinder Kingmaker campaign!

Generating stat blocks is still time consuming in T20, especially if you're building an NPC from scratch. But for me it helps to learn the system, including the available powers and feats. I'm getting quicker at it. I will hopefully also be able to remember who has what as I've created them myself (AFF just gives NPCs a Skill and Stamina score).

I'm finding it easy to convert the campaign over to T20's abstracted Wealth mechanic, which is another big difference from D&D. And I'm not missing a big book of magic items, as the AFF magic items are largely original yet easy to convert over to T20. I guess this is one of T20's strengths - it was created to be a generic alternative to d20, and easier to manage, with less book keeping. I suspect I will still use condition markers and a battle mat for combat situations, just to keep track of who has 'put the hurt' on who.

This coming weekend we will hopefully be playing some Spycraft with Ric in the hot seat. I've not generated a PC for this, but I am intrigued, as Spycraft 1.0 was something that grabbed my interest a while back, but I was never quite able to turn into a game.

The rest of the advance for my forex trading book has arrived, and while most of that will be going to my son's school fees next term, I am hoping to spare some for West Wind Productions' new Empire of the Dead, Gothic horror skirmish wargames rules. Regular readers of this blog will recall that we've played a bit of Gothic skirmish in the Rippers world using the Savage Worlds Showdown rules, including an epic six player battle which I refereed. I'm keen to see what these new rules can offer, and whether my existing collection of Gothic horror figures (some of whom were recently drafted in as part of the population of Linden Way, to be slaughtered by orcs) will fit into the initial set of factions. More on this later.